Our first week in Texas has been unbelievably amazing and we impatiently long to tell everyone about it.  But we find that life has a way of stopping us sometimes so that we can pause and reflect on what life is really all about.  We received word from my mom that our almost 6 year old guinea pig, whom my mother so graciously agreed to care for while we were on this trip, passed away yesterday.  For a guinea pig, he was old and, leaving on this trip, we knew the reality upon coming back, he might be gone.  Though we hoped he would out live the length of our adventure, sadly he did not.  I have never seen my children so cut to the heart in sorrow as I did last night when we told them this regretful news.  Fluffy will be deeply missed and is loved by us all. 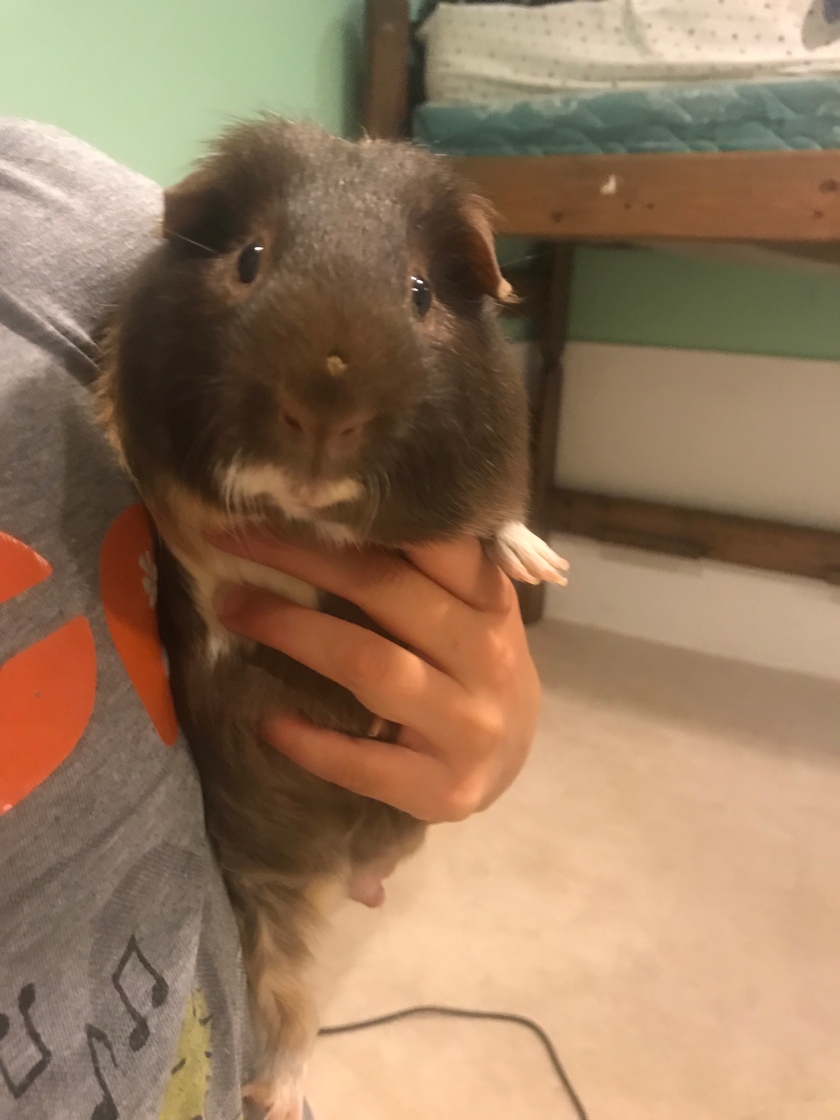 Caleb (12):  Fluffy is family to us. We all loved him very much. When we first got him I got scared at night because when he drank from his water bottle it made a clicking sound but then I got use to it. Here are a few things I really liked about Fluffy.  Fluffy’s favorite food was strawberry stems.  Whenever we opened the fridge and he heard plastic bags moving around, he would start running around his cage and squeak.  Fluffy also had a little spot on his nose that made him unique from any other guinea pig.  Once we bought a ball for him.  When we put him in there he would just sit there and do nothing.  The funnest part was when we put him on the floor and he would run under something and it would take us a while to get him out.  Also, another fun thing was making his cage look nice after we cleaned it and when we put Fluffy in it he flipped over his house. Lydia and I would tell Fluffy not to do it but it was no use.  I also tried teaching him tricks.  He was never interested.  He was a very relaxed guinea pig and had a very relaxing life.  We all miss him very much.  But we all know he is happy with God.

Lydia (10): Our family is not the same without Fluffy.  He was an important part of our lives!  When we got him I was four and it was two-ish weeks before my fifth birthday.  I loved how it was like my birthday present.  I had always wanted some type of pet besides a fish.  We had four fish in a row and I wanted something more active and some animal I could hold.  Since I was the kid in the family that was more of an animal person his cage was always in the room I slept in.  Fluffy was a great and smart guinea pig.  Once he got used to the routine of how we fed him, he was squeaking every time he heard a plastic bag because the lettuce was held in one.  He could be distinguished from any other guinea pig because he had a little spot on his nose that made him so cute.  When Caleb and I cleaned Fluffy’s cage we would make it look so nice.  But once we put Fluffy in his cage he would mess it up and Caleb and I would laugh and say, “noooo.”  It was funny! My favorite part about Fluffy is everything; funny, cute and smart, he was the best.  I’m going to miss him so much! But we all know he is happy up in heaven with God.

Asher (8): When I was two years old, we first got Fluffy.  I called him “Fwuffy” because I was really little.  I liked Fluffy because of his squeak, his fluffy fur, and when we let him out of his cage he ran around and hid.  I liked to feed him his dinner of lettuce, cucumber, and carrot ends.  It was funny when I opened the fridge and he did his little squeak.  The thing I will miss most about Fluffy is his little squeak.

Eva (6):  What I liked about Fluffy was everything.  When we opened the refrigerator he squeaked.  I liked to feed him his food.  I liked taking him out of his cage and putting him on my lap.  I liked to eat Fluffy’s cucumber and tomato stems.  I liked that Grammy tried to bring Fluffy on the plane to us when we were in Florida (but the airlines would not allow a rodent for check in or carry on).  It’s so weird that they only let birds and dogs and cats on the plane. But birds are crazier than guinea pigs, so why don’t they let guinea pigs on the plane?  The End.

Daddy: One of my favorite times at home is when Mel and the kids are gone and I have the house all to myself.  Such times are relaxing, reflective and recharging.  Though all my human family is absent during these times, I have always had the quiet presence of my furriest family member and I had never felt alone.  This, I reflect with sadness, will be greatly missed.

Mommy: When we brought Fluffy home, I was very reluctant to have a rodent in the house but the kids really wanted a pet and a guinea pig seemed like a good option.  I never planned on doing much with the little thing but I soon took to him.  His cute squeaks and mild manor won me over.  He was even cuddly and soft.  I can honestly say I loved Fluffy.  He was a very good addition to our family.  I will truly miss his presence in our home.

So today has been a day of remembrance for the “Fluffy-est” member of our family.  Fluffy, we love you and you are missed.