One of my passions is to go backpacking in the back country wilderness of the Olympic National Park and the Cascade mountain range.  In an effort to increase my abilities to survive for longer periods of time in the wild, I decided to attend a primitive survival workshop.  This workshop, hosted by Sigma 3 (https://survivalschool.us/), was a five day intensive class in the woods of the Missouri Ozark Mountains.

To get there from Waco, Texas, I had to travel eight hours by car.  I used the family mini-van and turned it into a miniature motorhome for my travels to the Ozarks.  It was complete with a fridge (cooler), dresser (traveling case), and bed (sleeping bag and mat). 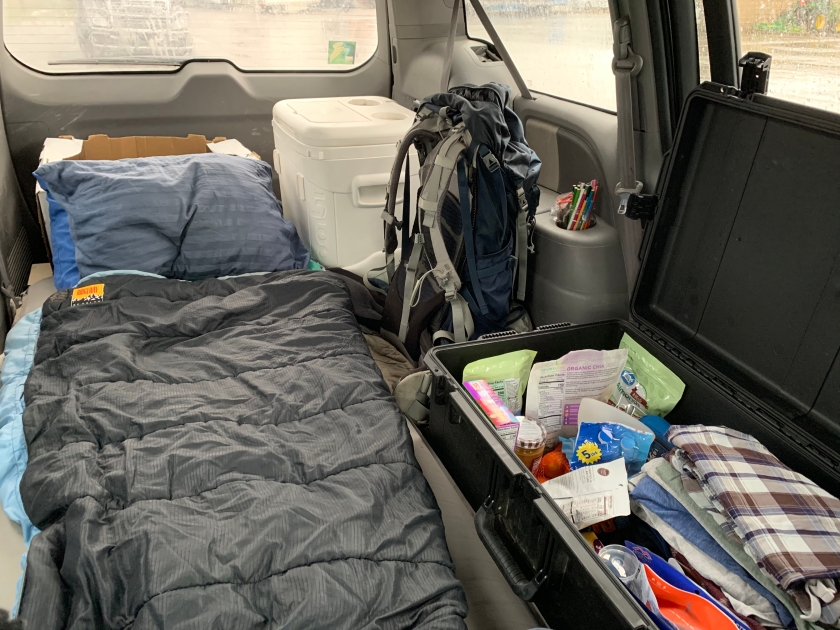 When I arrived, I set up my tent where I would sleep for a few nights before moving into a more primitive camping arrangement. 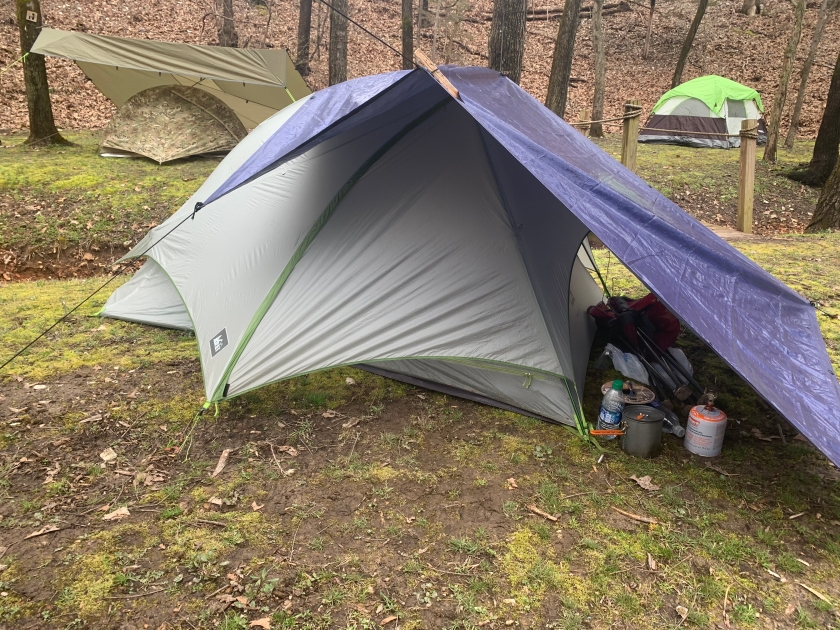 I stayed up late that night around the fire, getting acquainted with the fifteen other people I would be spending the next week with.  In the morning we began our adventures.

Day one was primitive shelter day.  Contrary to what I would first have assumed, shelter is the number one survival priority, even greater than food or water.  Where as a man can survive for 3 weeks without food and 3 days without water, a man can die within 3 hours without proper shelter in extreme conditions (freezing temperatures).  Once a temporary shelter has been established, then the lesser priorities of food and water can be found.  We learned how to create several shelters out of raw wooden materials including the debris hut, lean-to shelter, tepee hut and jungle hootch.  We also learned several ways to create shelter using cord and a poncho. 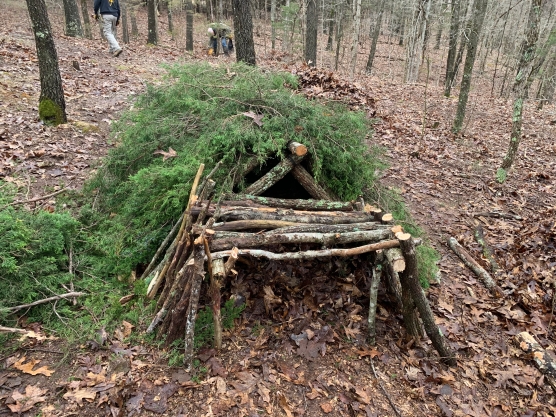 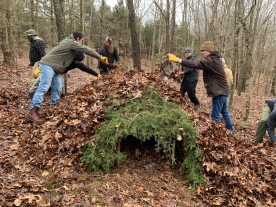 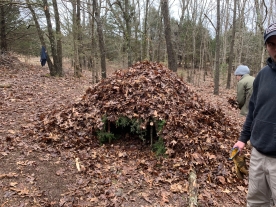 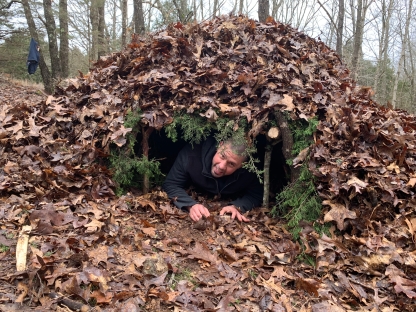 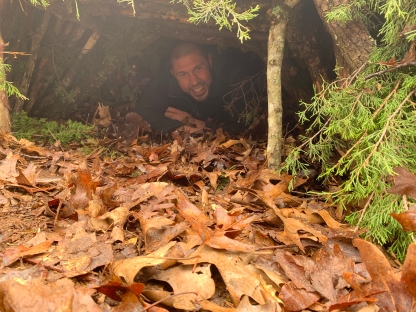 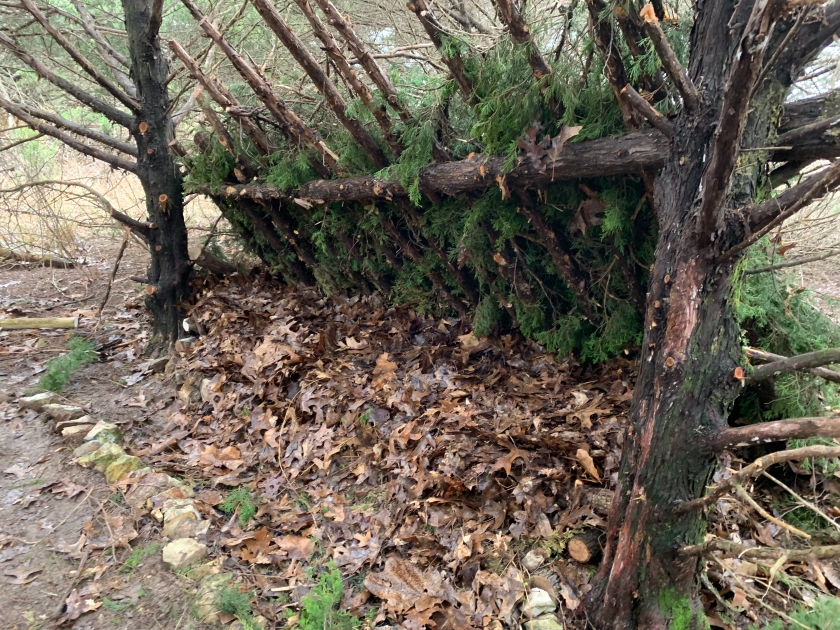 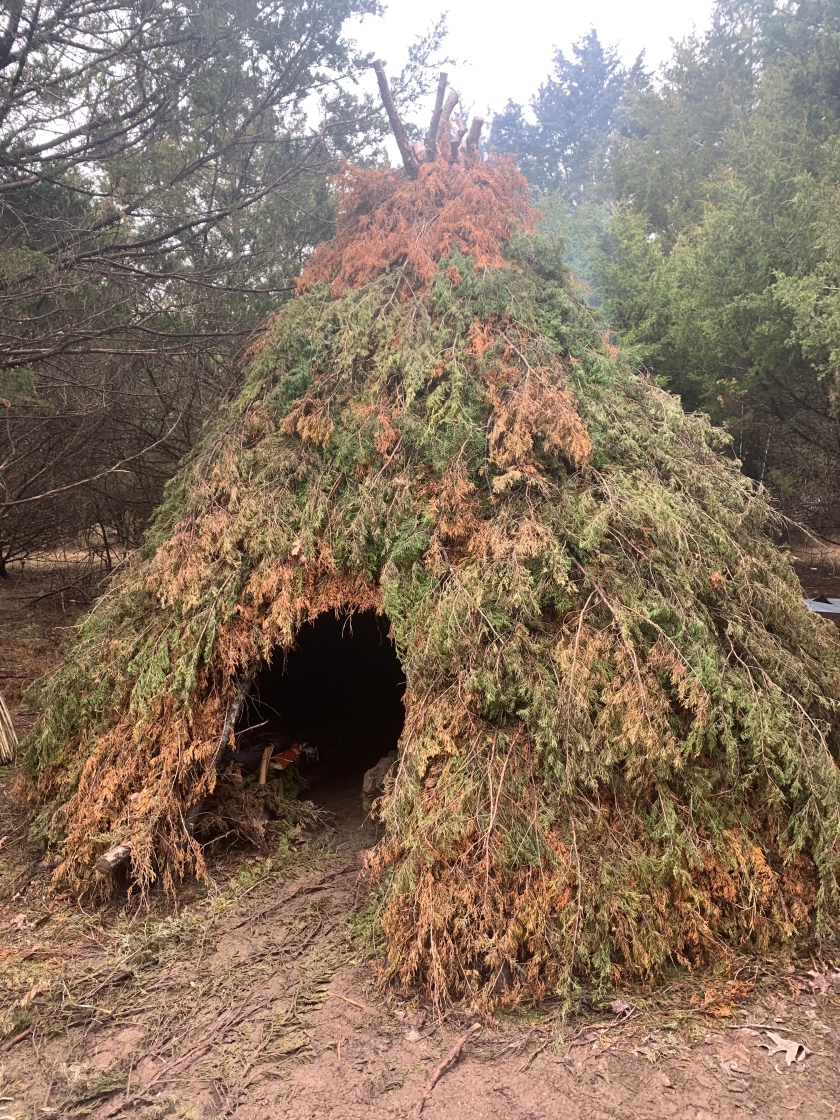 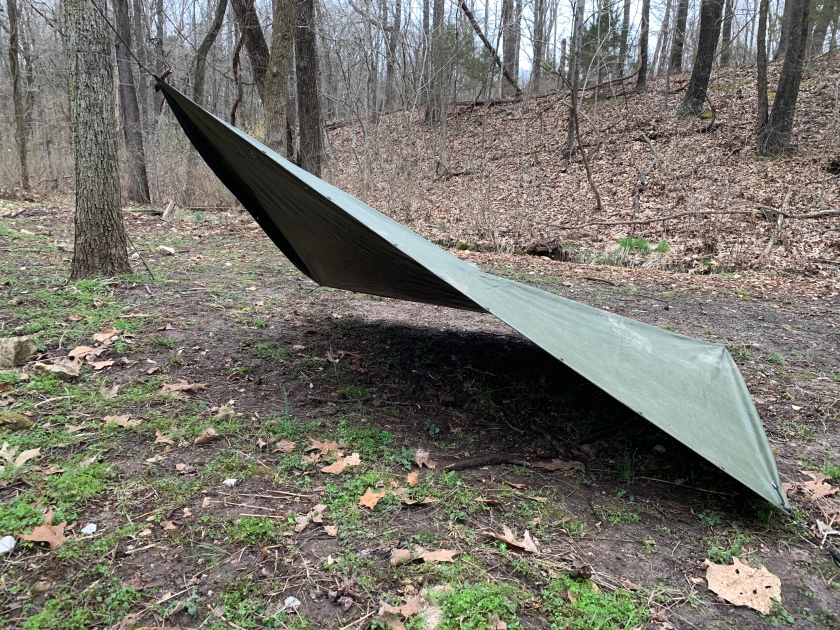 Day two we learn how to create a primitive water filtration system using sand, rocks and burnt wood (charcoal) to create a charcoal filter. (Sorry no picture).  We also learned techniques for starting fire with a feral rod. 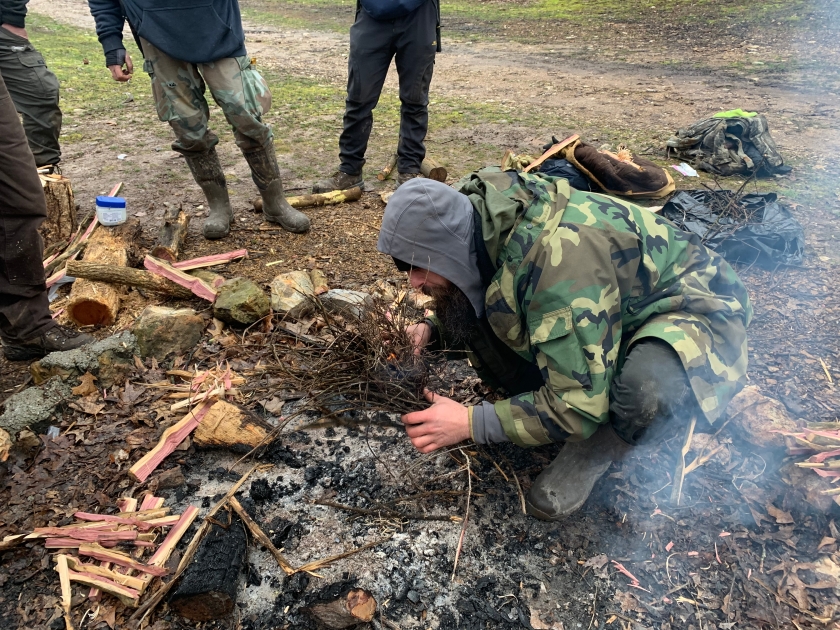 What might be thought of as the epitome of primitive survival skills?  Day three we learned how to create fire without modern fire starting devices.  The old fashion way of a friction fire created by rubbing sticks together using a bow drill made with a boot lace.  I was one of four students who successfully started fire that day. 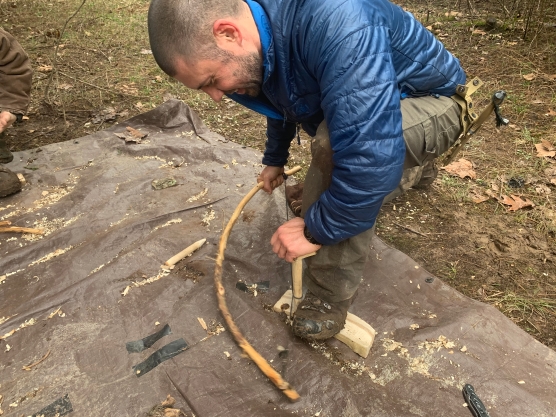 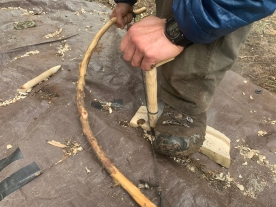 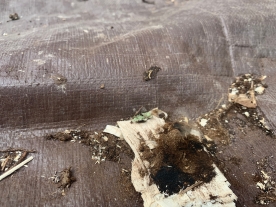 (After I produced an ember (bottom right picture), I added kindling to create a fire, though I did not take a picture of this).

Also, on day three, I moved out of the tent I brought with me, and for two nights, had the privilege of sleeping in the tepee hut.  Both nights we (I had a roommate named David) slept in the tepee hut we had thunderstorms throughout the night. 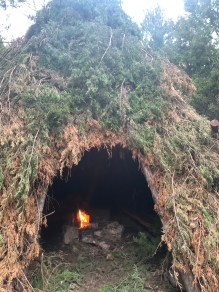 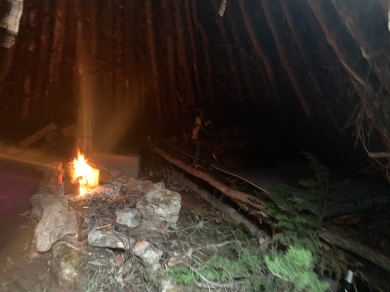 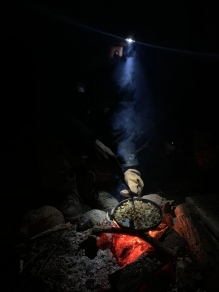 (Picture on the right is my roommate cooking us dinner over an open fire inside the tepee hut.

Probably one of the funnest days (though they were all fun) we made primitive traps.  Just like I remember seeing on the cartoons when I was a child, we made a loop on the ground with a rope with a trigger that would noose anything that set off the trap.  We made dead fall traps, figure four traps, bird cage traps, and spring snare traps. 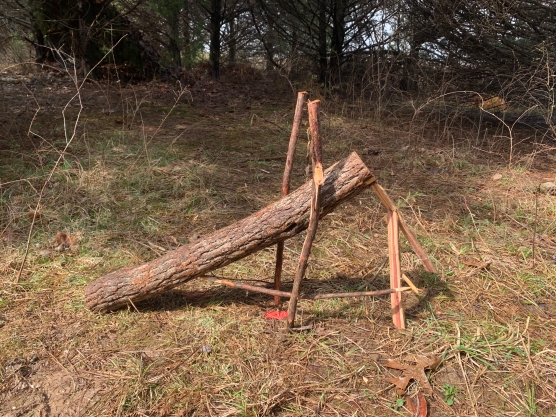 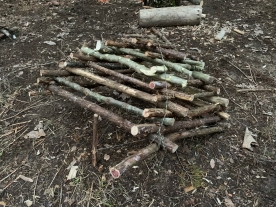 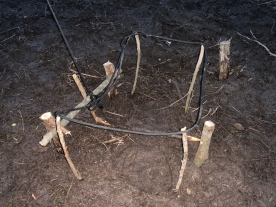 Day five we learned how to create primitive tools such as spears, hammers, and chairs.  We also learned how to braid cord out of dried grass in order to make rope. 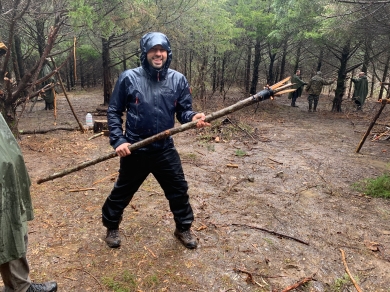 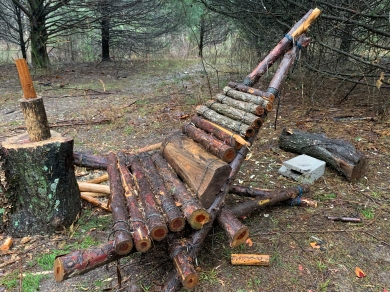 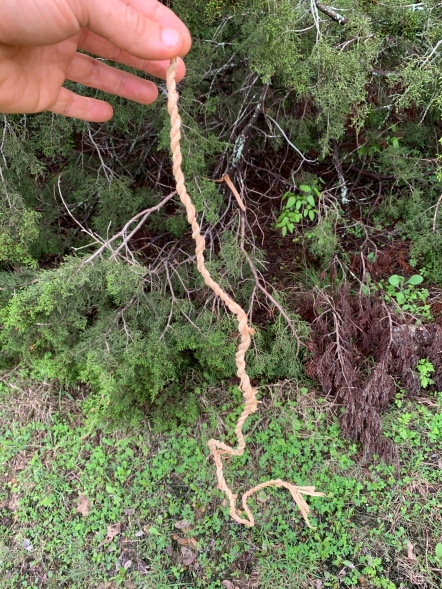 But, probably my favorite experience I had at camp was sleeping in the lean-to shelter on the last day of the trip.  Though wet and muddy, the rain stopped for the evening and I was able to sleep in a shelter that provided “just enough” protection from the elements. 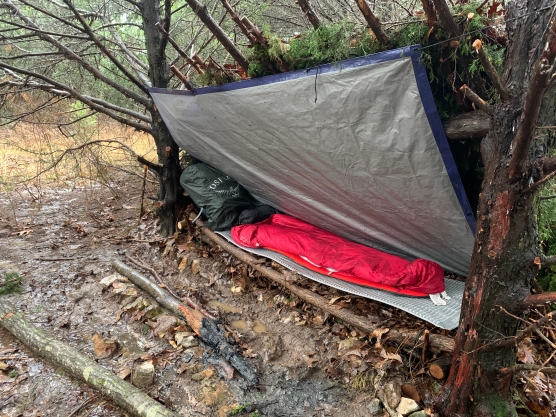 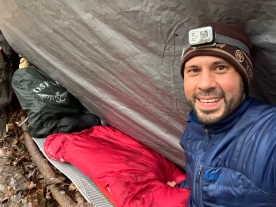 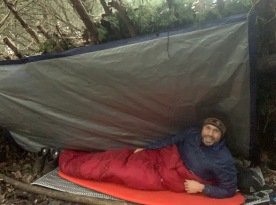 In summery, the experience was an overwhelming success and I learned many outdoor survival skills I had never been taught before.  The class I took was the “survival standard” and I hope to someday be able to take the week long advanced class in the future.  I hope everyone is well back home. I look forward to connecting with everyone again with my next blog post.