When Mel and I originally planned this trip, I had no thought of staying over night in Canada.  One of the advantages of our flexible schedule is we can make sudden, spontaneous choices and change our plans as we feel free to do so.  As we talked about our travels up into the state of Maine, we began discussing the options we had to travel into “Atlantic Canada” as I found out it is called.  I also discovered that when we crossed the U.S.-Canadian border into New Brunswick we crossed over into another time zone, the Atlantic time zone.  We now found ourselves four hours ahead of our Seattle-Mother-Land.

Mel had stars in her eyes as she told me how romantic it would be to travel to Prince Edward Island.  As I looked at the map, I also discovered a province close by called Nova Scotia.  I had heard of Nova Scotia before, but I thought it was some forgotten island in Europe abandoned by the vikings in the 1000s.  Turns out people actually live there.  I told Mel I wanted to go there, too, because I wanted my friends to think we drove our motor home to Europe.

As we traveled from Calais, Maine to Prince Edward Island (P.E.I. as it is called by the locals), we landed for the evening in a town called Moncton, New Brunswick.  Turns out some other Europeans landed at this very same spot and homesteaded the land in 1766.  I greatly enjoyed our stay here as I discovered the Trans-Canadian trail, a biking trail that connects Canada coast to coast.  The Canadians have definitely one-upped us on that.

As we traveled towards P.E.I. we had to cross a giant, 8-mile long, bridge.  After finding a local R.V. Park called the “Marco Pollo” we spent the rest of our day at the north island ocean beach on the Gulf of St. Lawrence.  I learned that the Marco Pollo was the fastest ship during its time and that it was ship wrecked during a fierce storm on this same ocean coast.  The beach was well worth the visit and the kids left reluctantly even as they shivered, wet and cold.

Mel informed me that some famous children’s book (which happens to be Mel’s favorite series from her childhood) called Anne of Green Gables was also written on P.E.I.  The Canadian government liked the book so much they created a National Park to celebrate Canada’s greatest literary contribution.  We found ourselves in a town called Cavendish, the city where L.M. Montgomery, the author of Anne of Green Gables,  was born.  We visited the historic “Green Gables” house, once owned by the author’s family, which inspired her in the writing of her book.  We hiked through the “Haunted Woods,” and visited the grave site of the famous author.  We continued our hike through the land the author grew up on and the church she attended.  At the end of our hike we took a romantic walk down “Lovers Lane,” where Mel and I were caught kissing on a bridge. 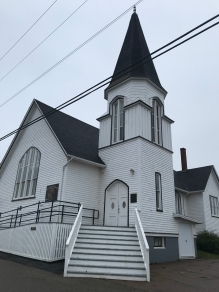 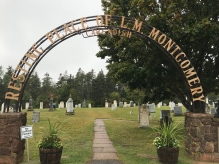 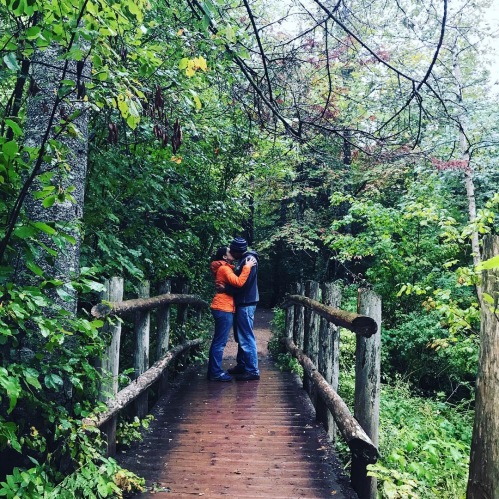 After our two days of nostalgia and romance ended, we traveled to Nova Scotia to a city called Halifax.  It sounded like a name that the Vikings would have given to a city, but to my delight we found a British fortress on a hill called the Halifax Citadel.  This was by far my favorite attraction we saw in Canada.  This “Castle” was equipped with tall stone walls and a deep and wide moat which we crossed to enter the fortified city.  The inter walls of the fortress formed a giant eight point star and large black cannons faced in all directions on top of the castle walls.  Tall watch towers gave unobstructed 360 degree views of both the sunny harbor and the heart of the city.  Inside the second stone wall was a “city,” a large multi story European building that was once the home of officers, noblemen and the social elite.  The castle was even decorated with authentically dressed British guards.  I was so impressed with the entire experience that I told Mel I wanted to buy a Castle after we made it back to Seattle.  She smiled. 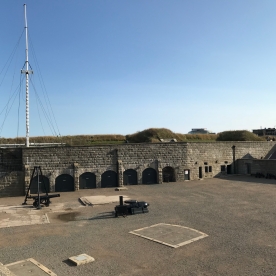 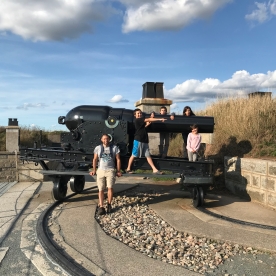 We rode our bikes through the city visiting attractions such as a Public Gardens from the 1800s, “The Oval,” a skateboard/bike park, and a city playground.  And what trip to a foreign country be complete without tasting the local ice cream.  By recommendation of our Canadian pastor friend, Pastor Blake, we visited “Cow’s,” and enjoyed flavors named Messie Bessie, and Caramel Moocchiato.  Our trip to Canada was complete.  Much fun, learning and culture. 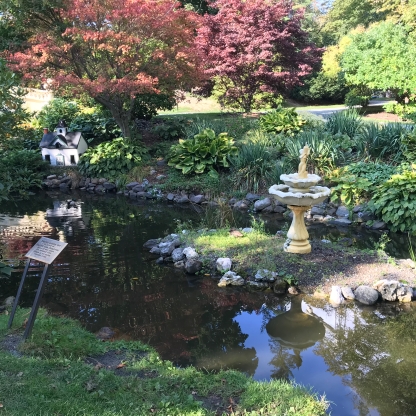 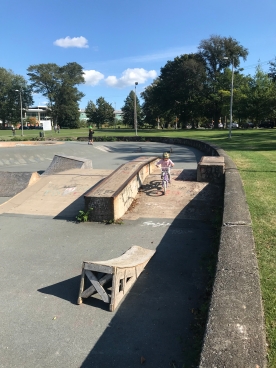 Though I enjoy Canada immensely, I was overly glad to cross over the border last night, back into the states.  As we landed back in America (the U.S. I mean) I no longer had to think about how many km/hr I was traveling, I didn’t have to figure out the exchange rate, and I didn’t need to guess how many liters of gas I needed to buy.  I entered back into a U.S. time zone.  Also, my cell phone started working again and I gained access to the internet, my means of connection to the friends and family I know back home.  I have been looking forward to connecting with you all again through this blog today and I am proud to say I find my home in the United States of America.